Here are some of the most dangerous roads for bicyclists in Florida.

About 800 bicyclists suffered serious injuries. A serious injury could range from a broken bone to paralysis. A police report will list a “serious injury” when a bicyclist cannot reach the hospital on their own and requires an ambulance for transportation.

About 5,200 bicyclists suffered minor or suspected injuries. According to the Florida Department of Highway Safety and Motor Vehicles (FLHSMV), minor injuries include visible injuries that do not incapacitate the accident victim.

A police report will note suspected injuries if the accident victim complained of pain or other symptoms but had no visible injury. These could range from soft tissue injuries to concussions.

These bicycle accidents happened across the state. Importantly, when rating St. Petersburg and Pinellas County as the most dangerous for bicyclists, studies look at accident rates rather than the gross number of accidents.

In 2021, Pinellas County had 546 bicycle crashes. By sheer numbers, more bicycle accidents happened in Miami-Dade and Broward Counties. But because these counties have larger populations than Pinellas County, they have lower accident rates.

These counties also have the most dangerous roads and intersections for bicyclists in Florida.

Most Dangerous Roads and Intersections in Florida

These factors combine to place bicyclists in high-speed, heavy traffic. These conditions are almost sure to produce bicycle accidents.

Some of Florida’s most dangerous roads and intersections for bicyclists include:

US-19 sits on top of 34th St. as it passes through Pinellas County. It has one of St. Petersburg’s most dangerous intersections at 5th Ave. N.

It also has two of the county’s most dangerous stretches of highway for bicyclists. One stretch is in Lealman near 62nd Ave. N. The other stretch is in Highpoint near the exit for FL-688.

With Pinellas County, Hillsborough County makes up one of the most dangerous areas in the nation for bicyclists. The area around Tampa Bay, including Tampa and St. Petersburg, has a reputation for bicycle accidents.

Hillsborough Ave is a major east-west route through Tampa. Bicycle accidents happen all along this road, but the worst hotspots are between Memorial Highway and FL-589 west of the airport and around FL-41, just east of I-275.

Nebraska Ave./FL-41 runs parallel to I-275 and provides a north-south route for bicycles that cannot use the interstate. Bicycle accidents happen all along this road.

Although Manatee County did not make the top 10 list of most dangerous counties for bicyclists, it has a major hotspot for bicycle accidents. US-41/14th St. W. in Bradenton has bicycle accidents all along the stretch between 26th Ave. to 69th Ave.

Bicycle accidents in Sarasota County are widespread. The only hotspot occurs on US-301 near 17th St. in Sarasota.

Miami-Dade County does not have hotspots. It has entire hot neighborhoods. Specifically, concentrations of bicycle accidents happen in the neighborhoods just north of Downtown Miami in Wynwood, Allapattah, and Model City. Some of the more dangerous roads include FL-934, US-27/NW 36th St., and FL-9.

Another hotspot is in Miami Beach. Alton Rd., near 15th St., sees a lot of bicycle accidents.

Broward County’s hotspots sit in Fort Lauderdale. FL-838 runs out to the beaches. It has bicycle accidents all along its length, but the area between NW 9th Ave. and US-1 is particularly dangerous. Another hotspot sits on US-441 just north of FL-870.

The hotspots for bicycle accidents in Palm Beach County are not in West Palm Beach. Instead, they fall south of West Palm Beach in Palm Springs. FL-802 is one hotspot. It runs east-west to the beaches.

US-1 runs near the coast and has a high number of bicycle accidents from its intersection with FL-5 to about 10th Ave. N.

FL-809 sits just west of the Palm Beach International Airport. It has concentrations of bicycle accidents along the stretch from FL-802 to US-98.

Florida’s most dangerous roads are unavoidable if you ride your bicycle as your primary form of transportation. These roads are often the busiest because they connect major commercial, recreational, and residential areas.

When you ride these roads, you should wear a helmet. And at night or in times of heavy traffic, consider using public transportation. Most buses in Florida include bike racks to safely carry you through dangerous areas. 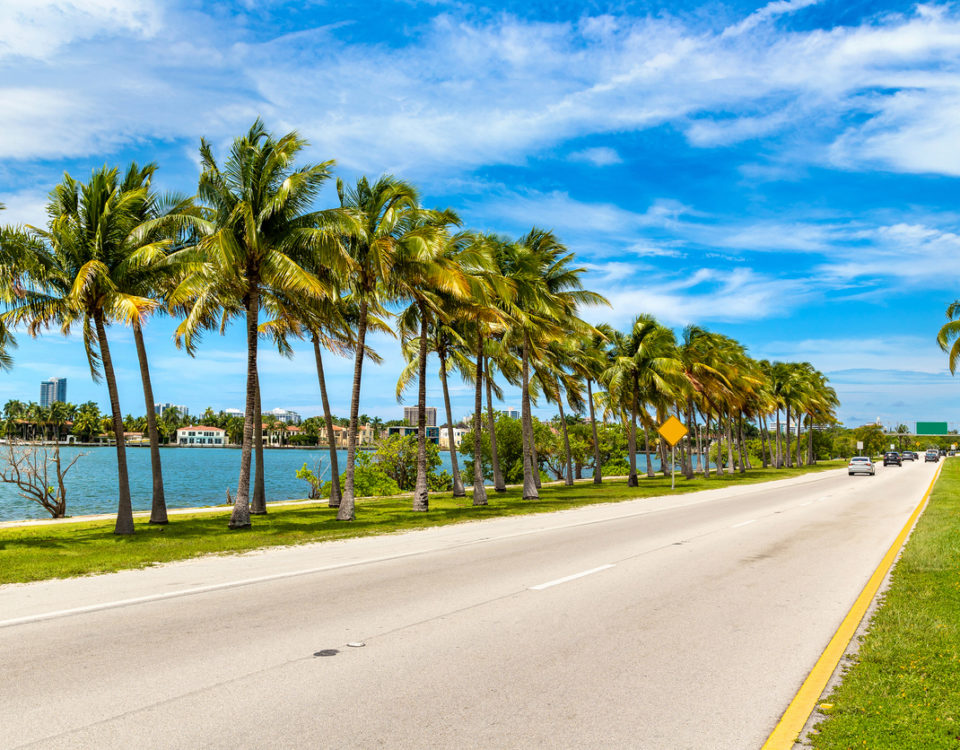